Record Store Day is April 22, and Des Moines is ready to join in the fun.

Conceived back in 2007, Record Store Day celebrates the unique culture surrounding the independent record stores around the US—and around the world. Zzz Records owner Nate Niceswanger says this day celebrates a trend in vinyl records that the Midwest has seemingly always loved. 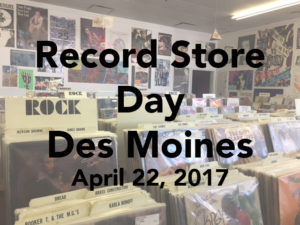 “There’s something about the Midwest in general. I think that vinyl has always been kind of strong—even when vinyl sales traditionally were down in the ‘90s and early ‘00s,” Niceswanger says. “It seems like there were a higher percentage of people here in the Midwest who were into vinyl. I’m not sure why that is, but there’s something about this area. There’s a very hardcore group of people.”

Record Store Day in particular offers a wide-range of events and special releases, including:

And by the looks of it, Des Moines music lovers are in for a treat this year—with two record stores participating in the Record Store Day festivities, there are two stops to search for your favorite vinyl records and, more importantly, your favorite limited releases. Although, if you’re really hoping for a particular record, be prepared for some competition.

“Sometimes we’re lucky just to get one or two copies of certain things, and people know that, so the really hardcore and crazy people will come out and stand in line early,” Niceswanger explains. “We’ve had people camp out overnight to get things. It’s just first come, first serve.”

Here are the two shops that will (hopefully) make your vinyl record dreams come true this Record Store Day.

“We are one of the two stores that participates in it officially with the Record Store Day organization,” Niceswanger explains. “That allows us to sell the special releases, and that’s the big draw for people. I think this year there’s four or five hundred different titles coming out that day.”

In addition to the special, limited-edition vinyl records specific to Record Store Day, the shop carries a variety of new and used vinyl LPs, plus a variety of used CDs, a curated selection of new CDs, and a sampling of other musical formats, including 8-tracks, cassettes, reel-to-reel tapes and more. Niceswanger says to also keep your eyes open for additional specials on the holiday made for vinyl collectors.

As for vinyl, they carry the best from both vintage and new LPs and 45s, with collectible editions, rarities, picture disks, and more from such artists as the Beatles, Led Zeppelin, and Black Sabbath.

This Record Store Day, they’ll be celebrating by putting used vinyl on a special sale alongside the exclusives. And just so you’re prepared—hot ticket items are on a hide-and-seek basis. May the odds be ever in your favor.

What vinyl records are you hoping to pick up this Record Store Day?