Molly’s Cupcakes is a local cupcake bakery that can be found in the heart of downtown Des Moines.

This local bakery was founded by a third-grade teacher who was praised for her mouthwatering cupcakes, which she would bring in for each one of her student’s birthdays.

One of Molly’s signature traits is their infamous swing chairs that are found in each one of their five locations.

“It is fun to watch the adults because most of them haven’t been on a swing since they were kids,” said Mercer-Smith. 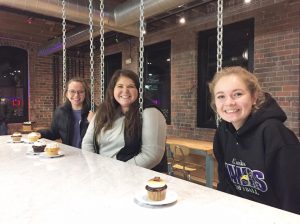 All of Molly’s cupcakes are made from scratch continuously throughout the day, so you know you are always getting a fresh cupcake. They even have a make your own cupcake option where they allow customers to pick and choose the type of cupcake they want as well as the toppings.

“We try to give you as much freedom as you can have in a cupcake bakery,” said Mercer-Smith.

With all of their cupcake options it can be very overwhelming so here are a few favorites that you have to try.

This is one of the lighter cupcakes that Molly’s offers. It has a vanilla chocolate chip cake that is stuffed with raw cookie dough filling. The frosting is buttercream sprinkled with chocolate chips and a mini cookie to top it off.

This cupcake has a vanilla funfetti cake with cake batter filling. It also has a blue vanilla topping and sprinkles. This cupcake is a favorite among the kids!

This cupcake has a chocolate cake that is stuffed with peanut butter filling. Chocolate ganache is spread over the top of the cake and then topped with crushed butterscotch topping.

It starts off with a chocolate cake that is packed with cookies-n-cream filling. The cake is then loaded with vanilla buttercream frosting and topped with a piece of a cookie.

This cupcake has a chocolate cake that is jammed with marshmallow fluff. Hot fudge is drizzled over the top. It is then sprinkled with graham cracker crumbs and chocolate bar chunks. 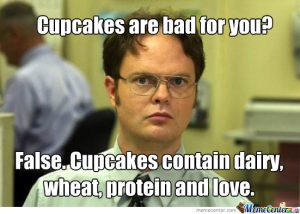 Molly’s Cupcakes is not just offering delicious cupcakes to all of its customers, but it is also trying to make a difference. A portion of each sale that is made will go to schools in the Des Moines community. Molly’s also donates actual cupcakes to local schools when they are having a fundraiser or school function.